IELTS grows to 3.5 million a year 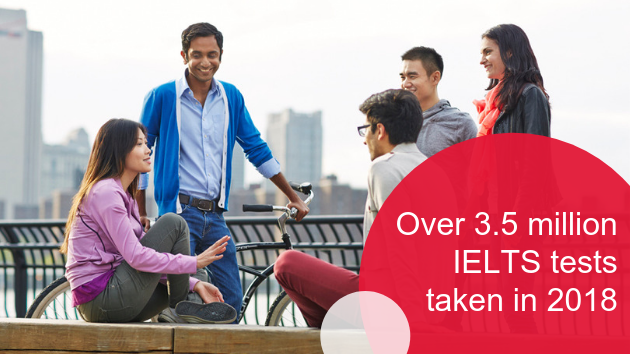 IELTS plays a leading role in international higher education. It is recognised for entrance to universities and colleges across the English-speaking world, including 100% of universities in Australia and the United Kingdom, more than 3,400 institutions in the United States as well as hundreds of institutions in many other countries. It is also the most widely used test for visa and citizenship purposes in Australia, Canada, New Zealand and the United Kingdom.

Introduced in 1989, IELTS has built its worldwide reputation on a combination of secure reliable testing backed by extensive research to ensure that it meets the needs of users across a wide range of sectors including higher education institutions, government departments, healthcare regulators and employers.

An IELTS test result demonstrates not just a passive knowledge of English, but also the ability to use the language effectively in a variety of real-world contexts, and the language skills need for success in higher education, professional contexts and everyday life in English-speaking countries.

Equally important is the global availability of IELTS at over 1,200 test centres in more than 140 countries and territories. Test availability increased last year with the global roll-out of computer-delivered IELTS.

Warwick Freeland, Managing Director – IELTS, IDP Education, said 2018 was a milestone year for IELTS, “Last year we introduced IELTS on computer in over 20 countries and territories around the world, which has seen us increase our testing dates from two days a week to up to seven days a week,” Mr Freeland said.

“We are committed to giving test takers more opportunities to choose the test time and format that positions them to achieve their goals,” he said.

James Shipton, Head IELTS, British Council, said: “3.5 million tests taken last year is a testament to the ongoing value and trust placed in IELTS by our partners and test takers around the world. IELTS continues to provide a gateway for people to fulfil their aspirations and behind these test numbers are the personal stories of test takers who have gained entrance to their target university, of individuals who have been able to kickstart their career, and of others who have been able to make their dream move to a life in a new country.”

IELTS is the International English Language Testing System, the world’s most popular English language proficiency test for higher education and global migration with over 3.5 million tests taken in the last year. Over 10,000 organisations trust and accept IELTS as a secure, valid and reliable indicator of true to life ability to communicate in English for education, immigration and professional accreditation. IELTS is jointly owned by the British Council, IDP: IELTS Australia and Cambridge English Language Assessment.